Body size is an important parameter for Palaeontologists as it is a measurable characteristic nominally related to some intrinsic  biological aspect. It has been noted that species in the immediate (<1 million years) aftermath (Fraiser et al. 2011) of (mass) extinction events can be smaller than those preceding the (mass) extinction event (Urbanek, 1993), such size change occurring across clades and families. This phenomenon was dubbed by Urbanek (1993) as the ‘Lilliput effect’, a reference to Gulliver’s Travels in which Gulliver (our ‘reference specimen’) finds himself in the land of Lilliput populated by people considerably smaller than himself (thus giving us a relative size-change). The result of (potential) ecosystem pressure on a species body size following an extinction event leads to a reduction in size (Urbanek, 1993; Twitchett, 2007; Morten and Twitchett, 2009; Metcalfe et al., 2011), however this body size change is only a temporary reduction in size, with those affected species that survive long enough returning to a similar size as the pre-extinction event specimens, as the pressure on the ecosystem is reduced. The cause of this effect remains enigmatic, whether it reflects some intrinsic species response to environmental change (Garilli et al., 2015); the post-event ecosystem reorganization that may have had a detrimental impact upon species that survive, or new species that evolve in the aftermath (Twitchett, 2007); or a taphonomic effect brought about by a loss of larger, rare, individuals has been debated (Brayard et al. 2010, 2011; Fraiser et al. 2011).

The late Permian mass extinction event was one of the most severe extinction events in the Phanerozoic (the past half a billion years of Earth history). Through measurements of growth lines, which actually represent cessations of growth, on shells collected from the Dolomites of  Italy we were able to show that the species that survived the extinction had frequent interruptions to their growth. New work has focused on using oxygen isotopes to unravel the environment at the time of growth.

This work was funded by the Palaeontological Association and Nuffield Research Bursaries. 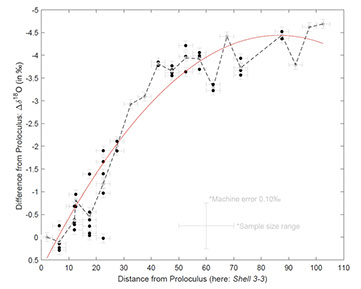 Oxygen isotope measurements of a specimen collected from bed KTL 34-1 at Kettleness, North Yorkshire. This bed is considered to be within the survival interval of the Pliensbachian-Torician extinction event(Metcalfe, 2018).