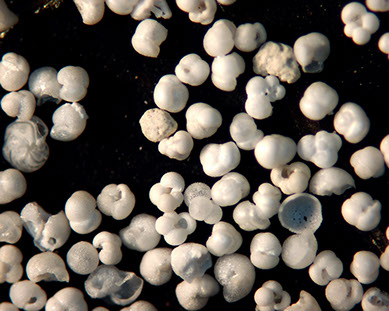 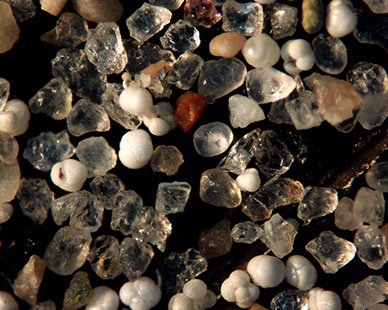 Pictures of the washed sediment from a section of core T90-9P that covers Marine Isotope Stages (MIS) 8 and 7 (Metcalfe et al., 2015; Feldmeijer et al., 2015; Metcalfe et al., 2019). On the left hand side is interglacial sediment (Core depth 771cm) dominated by planktonic foraminifera (although the benthic foraminifera Cibicoides sp. is on the left of the picture) which gave rise to the informal name 'Globigerina ooze'. On the right hand side is  a sample (Core depth 824cm) that is dominated by terrigenous material that represents an ice rafting event. Both pictures are from the 300-355 μm size fraction. It should be readily apparent the striking contrast between these two samples.

Dredged (iceberg) erratic’s have captured the attention of Geologists and Palaeoceanographers (Bramlette and Bradley, 1941; Cole and Crook, 1910; Flett, 1904; Peach, 1912; 1913; Wiseman and Ovey, 1950) since the earliest deep-sea samples could be collected from the sea-bed (Thomson, 1874). Many of these collected erractics occurred beyond the modern extension of the polar front(s) that acts as a limit of the modern drift of icebergs (Murray and Philippi, 1908; Murray and Renard, 1891; Needham, 1962); and with the development of longer (Kullenberg, 1947; Wiseman, 1947), more advanced (Ewing), coring methods (Hopkins, 1964) later researchers  were able to put into context both spatially and temporally these discoveries with noticeable glacial marine deposits (Bradley et al., 1938; Bramlette and Bradley, 1941; Heinrich, 1988; Ruddiman, 1977). Remarkably, periods associated with the oxygen isotope values (δ18O) of marine isotope stages (MIS) 2 to 4 have, in deep-sea sedimentary archives from mid-latitudes in the North Atlantic Ocean, a series of discrete layers that are rich in lithic fragments (Ruddiman and McIntyre, 1976) and poor in planktonic foraminifera (Bond et al., 1992; Bramlette and Bradley, 1941; Broecker et al., 1992; Heinrich, 1988; Ruddiman, 1977) interspersed between foraminiferal rich sediments. These layers are found, predominately, between 40° to 55°N and 10° to 60°W (Conolly and Ewing, 1965) from Newfoundland to the European Continental Margin (Broecker et al., 1992; Grousset et al., 1993; Heinrich, 1988; Ruddiman, 1977) and have been referred to as either the Heinrich Belt, Ruddiman Belt or IRD belt. It is worth noting that higher latitude core sites (>55°N) differ not in the lack of similar samples (i.e., those that are lithic rich and foraminiferal poor) but lack the characteristic discrete interbedded layering of lithic rich and lithic poor. The lithic fragments found within the IRD belt layers are considered to represent continental bedrock, as well as shelf and terrestrial sediments, that are assumed to be deposited by large iceberg armadas entering the North Atlantic Ocean and subsequently releasing material during transit and iceberg melting (Bramlette and Bradley, 1941; Conolly and Ewing, 1965).

'Cubes' of ocean sediment waiting for magnetic measurements to be performed at Lund University (Sweden).